November event: Why should Humanists care about Animal Rights?

Dr. Wrenn is Lecturer of Sociology with the School of Social Policy, Sociology and Social Research at the University of Kent and co-director of the Centre for the Study of Social and Political Movements.

She was awarded Exemplary Diversity Scholar, 2016 by the University of Michigan’s National Center for Institutional Diversity. She served as council member with the American Sociological Association’s Animals & Society section (2013-2016), was elected Chair in 2018, and is co-founder of the International Association of Vegan Sociologists.

She is the author of A Rational Approach to Animal Rights: Extensions in Abolitionist Theory (Palgrave MacMillan 2016), Piecemeal Protest: Animal Rights in the Age of Nonprofits (University of Michigan Press 2019), and Animals in Irish Society (SUNY Press 2021).

The meeting link is available here.

We normally run 11 events every year and details of each event will be announced in advance on our Facebook page and here on our website.

Non-members are always welcome at our events.

Guest speakers at meetings in the last few years have included:

Past Events and Videos

Past Events and Videos

Over the past years the HAI have been privileged to host a wide range of guest speakers with varied interests and backgrounds.  Scroll down to see what you might have missed and would like to catch up on.

Dr. Boylan is a former Master of the National Maternity Hospital and former Chair of the Institute of Obstetricians and Gynaecologists. He was appointed by the Minister for Health to advise the HSE on the implementation of the Termination of Pregnancy Service in 2019. He is the author of In the Shadow of the Eighth: My Forty Years Working for Women’s Healthcare in Ireland (Penguin, 2018) and, with Dr. Jennifer Walsh, The Irish Pregnancy Book (6th edition, O’Brien Press, 2020).

The Catholic Church owns seven public hospitals, which amounts to 20% of public hospital beds in Ireland. They received over €1 billion in funding from the HSE in 2020, and that number is likely higher this year, Dr. Boylan said. 66% of private hospitals in Ireland have a Catholic ethos. Also, the new National Maternity Hospital is set to be owned by a Vatican-approved private company, Dr. Boylan said.

Abortions, sterilisations, and other treatments are not allowed at these hospitals because of their Catholic ethos. On these matters, Dr. Boylan said, canon law trumps state law. Article 44.2.5 of the Constitution protects the right of every religious denomination to manage its own affairs. The Irish Supreme Court has yet to interpret the extent of this autonomy in a healthcare context.

Dr. Boylan said conservative American Catholic organisations are taking over religious hospitals around the world as religious orders leave direct care. This has already happened in Ireland with the Bon Secours, the largest private hospital group in the country. It merged with Bon Secours Mercy Health, headquartered in Cincinnati, Ohio. It receives substantial funding from the HSE. “This is big business,” Dr. Boylan said. “American influence is likely to grow with the passage of time.”

Dr. Boylan encouraged HAI members to lobby their TDs. David McConnell, HAI President, encouraged him to write an article to raise public awareness of these issues.

A recording of the event is available to view here.

Jody O'Neill, actor and playwright talked about her experience of being diagnosed with autism at the age of 39.

Jody is an award-winning autistic writer and performer, based in Dublin. Her play "What I (Don't) Know About Autism" was co-produced with the Abbey Theatre and played to critical acclaim and sold-out houses in 2020 and 2021. Jody's work has a strong focus on disability advocacy and social inclusion. She is currently Theatre Artist in Residence at UCC and Cork Opera House, and is a 2022 recipient of the Markievicz Award.

Jody’s young son was diagnosed with autism three years before her. Their personalities were so similar, Jody decided to seek out an assessment for herself. Being diagnosed was a positive experience, she said. Many of the challenges she had in her life could be re-framed through the lens of autism. It made her realise she was working on a different operating system to other people.

Negative sentiments about autism in the media led her to write the play, “What I (Don’t) Know about Autism.” It was structured so autistic people could come to see it, with breaks for questions built into the script. Disability advocacy and inclusion have become major themes in Jody’s work. Presently, she’s writing a piece of educational theatre about an autistic girl who likes double numbers and routines.

Jody doesn’t want her son growing up in a world where autism is seen as a negative. “I wish we would talk more about human needs, rather than special needs,” she said.

Marelle has a relentless passion for education and philosophy and has spent two decades embedding philosophical inquiry into her teaching and learning environment.  She worked in the UK as Head of Religion, Philosophy and Ethics in both the state and independent sectors and was actively involved in teacher professional development in Philosophy for/with Children (P4C) during this time. Marelle’s work with the NCCA on the Philosophy Short Course lured her back to Ireland in 2017 and she wears several hats as she supports the development of Philosophical Inquiry and P4C in all areas of the Irish education system. Co-founder of Philosophy Ireland and Director of The Thinker’s Midwife, Marelle lectures on the PME programme with the School of Education, University College Dublin, and is involved in several educational initiatives there, including the SFI funded project; ‘Girls in DEIS Schools: Changing Attitudes, Impacting Futures in STEM’, which was shortlisted by the Teaching Council for their Teachers Inspire Award for Teacher Collaboration in September 2019.  In more recent times, Marelle has turned her attention to educational projects focusing on Cyber Resilience, Digital Technologies, and Global Citizenship Education.

The video of the event is available to watch on our YouTube channel.

Dr Catherine Stapleton is a lecturer in Education in MIC, St. Patrick's Campus, Thurles. She teaches modules on Diversity and Inclusion. Her current research is focused on human rights and religious inclusion in the context of increasingly belief-diverse societies. Her research projects are funded by the Irish Research Council, Irish Human Rights and Equality Commission and SCoTENS. She is the co-author of the report on non-religious teachers in schools with a religious ethos.

A link to the jointly published research paper can be found here. 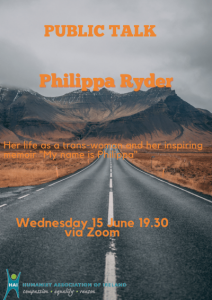 Philippa is a transgender woman. She joined the civil service, the Property Registration Authority, in 1980. She is married with one daughter.

She became involved with LGBTQ+ activism when she came to terms with herself as transgender, eventually transitioning about 12 years ago. She was very involved with both the Marriage Equality and Repeal the 8th referenda. She describes herself as a passionate, inclusive feminist.

Over the past 15 years she has been a board member and chair of Transgender Equality Network Ireland (TENI) and part of the Steering Committee of Transgender Europe (TGEU). She was a founding committee member of Sporting Pride, Ireland’s LGBTQ+ sports organisation.

In 2019 she was one of the founders of Under the Rainbow where she is now Chief Operating Officer. She is also a director of Dublin Pride.
Her memoir, My Name is Philippa, is now out from Mercier Press and available in all good bookshops and online.

For our April event, our guest speaker was Research and Policy Analyst Michelle Murphy. Michelle will present different approaches to implementing a basic income system, and outline some proposals as to how a basic system for Ireland could be implemented.

Michelle Murphy is Research and Policy Analyst with Social Justice Ireland. Among her main areas of interest are the impact of policy on income distribution, the interaction of a minimum social floor and just transition and sustainability and regional development.  She is also responsible for Social Justice Ireland’s European engagement including the European Semester and the Pillar of Social Rights.  This will be followed by a Q&A session.

Missed the lecture?  You can play it back here.

Using evolution to improve our understanding of mental health and illness

Evolution provides the single most compelling and overarching explanatory model in biology. To quote Theodosius Dobzhansky: ‘Nothing in biology makes sense except in the light of evolution’.

Despite this, evolution is largely ignored in clinical medicine, psychiatry and psychology. Reasons for this neglect may be related to ambivalence around evolution itself, concerns about historical abuses of evolutionary ideas and a perception that evolutionary applications lack clinical usefulness for patients.

Join us on Wednesday 16th February 19:30 , as our guest lecturer Professor Henry O’Connell draws from the current leading researchers and writers in the field to make the case for the use of evolutionary principles in complementing and enhancing existing models for our understanding of both normal mental phenomena and mental illness.

The Humanism Ireland Podcast covers HAI events, interviews, lectures and more - if it's of interest to Humanists, it's here!
Listen and learn more about Humanism in theory and practice from volunteers and activists. Real people talking about issues that really matter from a realistic perspective.
Listen, Join and follow at mixcloud.com/HumanismIreland/
Like and share it on Twitter, and look out for more episodes coming up in the future. Want to get involved? Maybe you’ve got something you’re eager to have discussed? We welcome your feedback and ideas. Get in touch here: info@humanism.ie

Episode 29:  Paul Rowe - The Future of Equality Based Education

Episode 25: Dignity in Dying - Do We Have a Choice?

Episode 17:  Dick Spicer - Origins of the Humanist Association of Ireland

Episode 4: A Time To Remember

Sign up today and receive our monthly email newsletter straight to your inbox.